Nautor's Swan, a complex challenge from many points of view

Nautor’s Swan is a renowned Finnish manufacturer of luxury sailing yachts. The Boat Technology Center, its new production facility, is located in Jakobstad, Finland, and it is for this site that USI Italia developed a complex and challenging project. 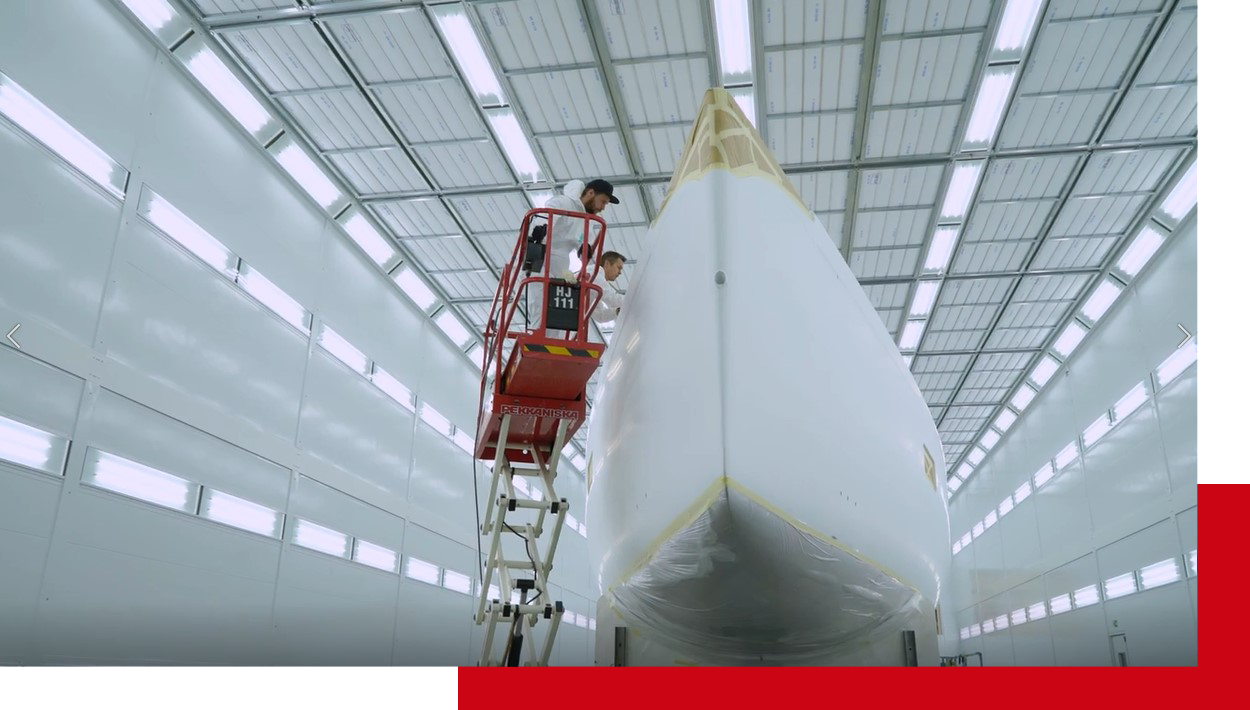 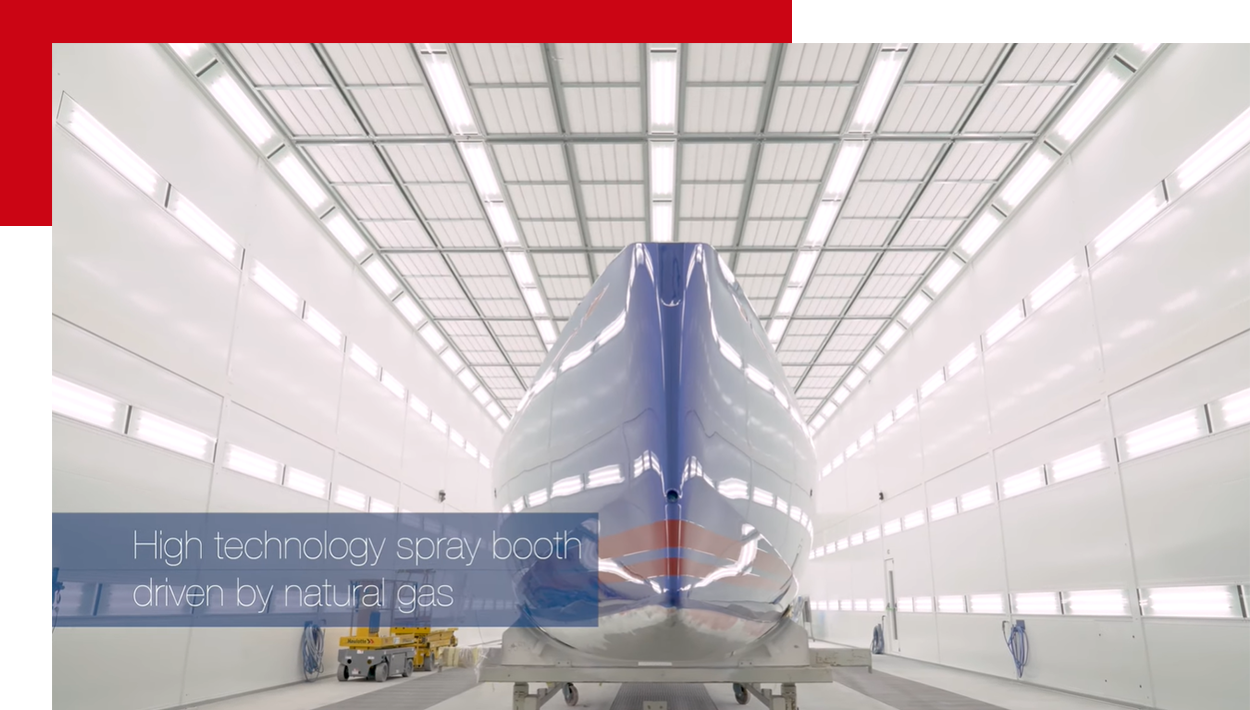 The origins of the Nautor’s Swan project

The Nautor’s Swan project was born after a meeting with the CEO of Nautor Group during AUTOPROMOTEC, one of the most important trade fairs in Italy. As on previous occasions, the customer had a very precise idea of how he intended to develop his plant, both in terms of organization of the working space and electrical heating with associated energy recovery, different from traditional heating.

However, given the size of the installations and the required temperature differences, even with the use of heat recovery systems (HRS), the project was not possible in those terms.

USI’s engineers estimated the actual calories needed for this type of plant, demonstrating that a similar solution was not feasible, since it would have required a much higher calorific power and the significant airflow rates might not have complied with European standards.

Once again, we were not afraid to persuade the client with our consultancy service, coming up with a tailor-made solution able to guarantee effectiveness, efficiency, and flexibility. 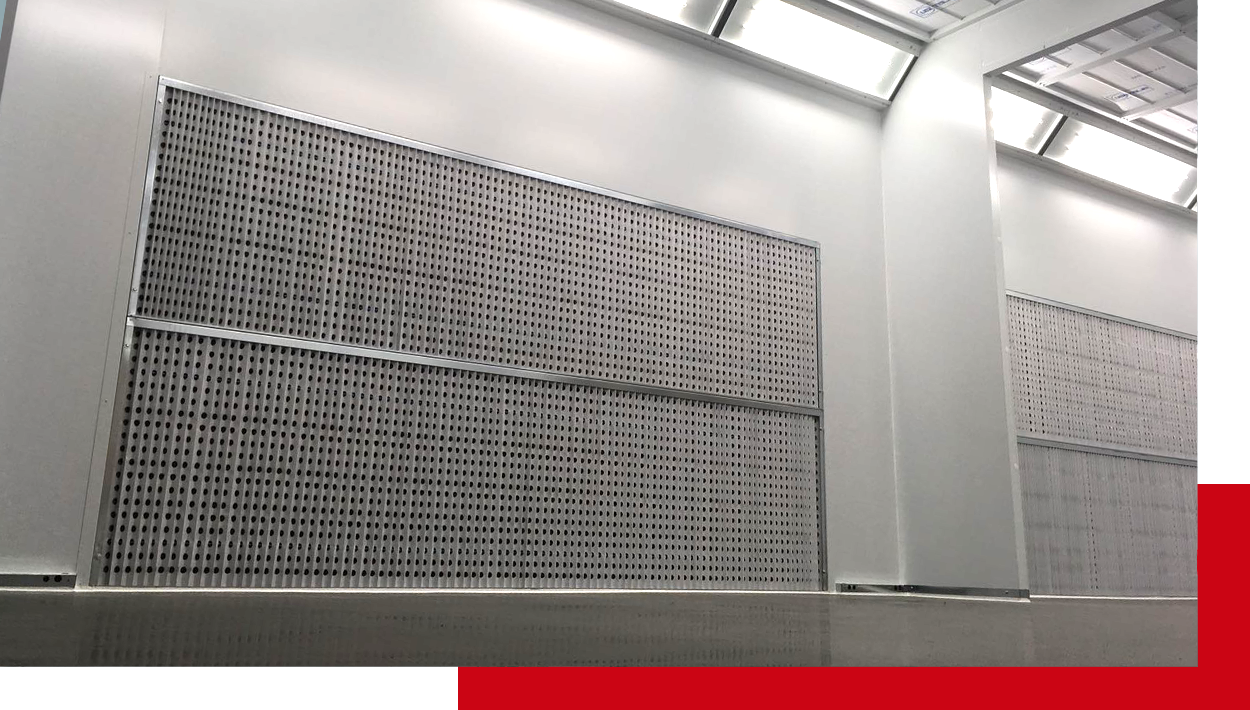 The first step was the joinery department, basically a paint booth and a drying oven: a fairly small but well-enclosed room. A considerable amount of energy could be saved through HRS and an efficient processing cycle where two operators could work simultaneously in the paint booth.

With a view to differentiating costs and proposing only what we think is best for our customers, we offered a solution that would differentiate us from the competition: uniformly distributing the air flows within the application area, between the workstations, rather than injecting the air into the room unevenly. 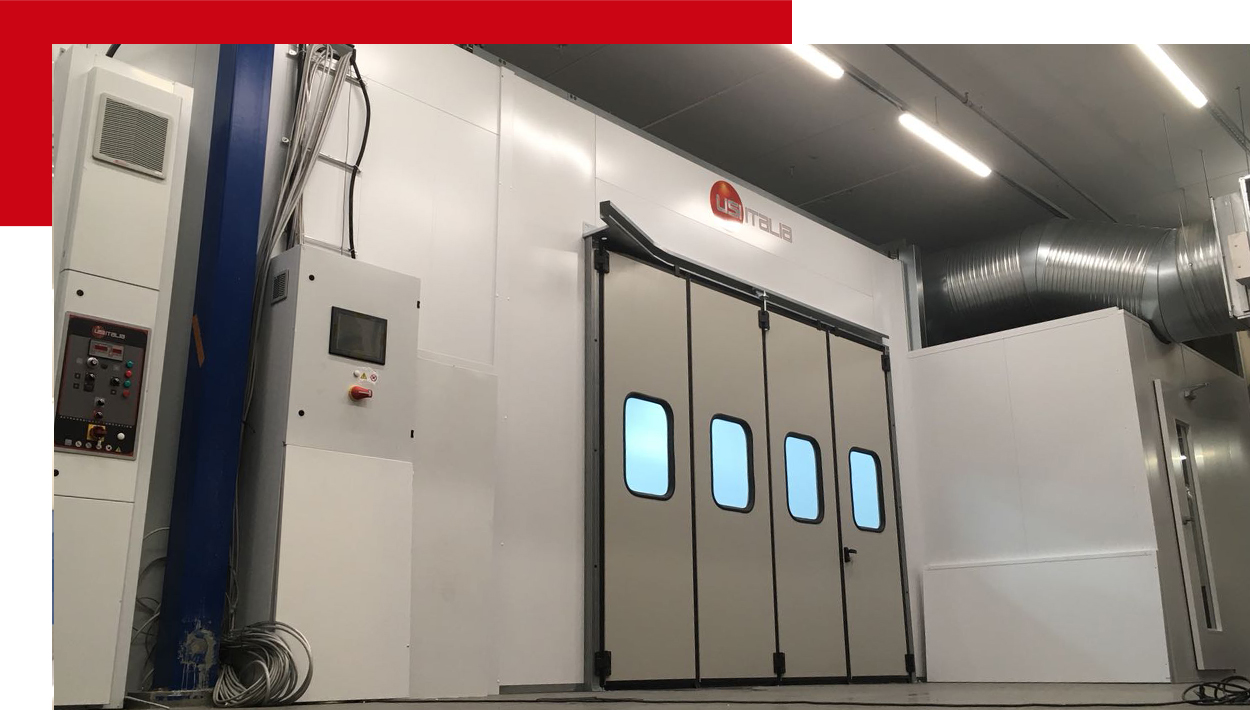 The oven in the joinery department was designed with a semi-vertical airflow, with the air inlet units located above the cabins and highly sealed doors. As the heating-ventilation units were constrained by their position, we also had to find a creative solution for conveying the incoming air ducts.

During the meetings at the AUTOPROMOTEC trade fair, our project had so impressed the customer that he agreed on the outline of the implementation steps and sent us the project layouts shortly afterward. 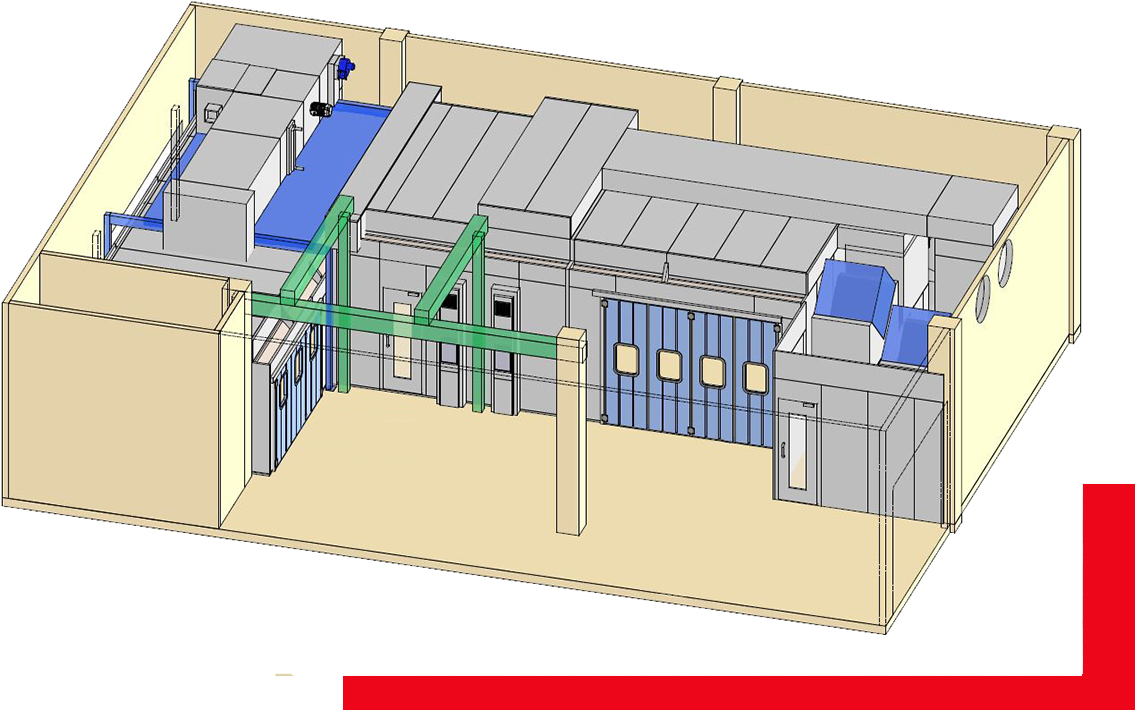 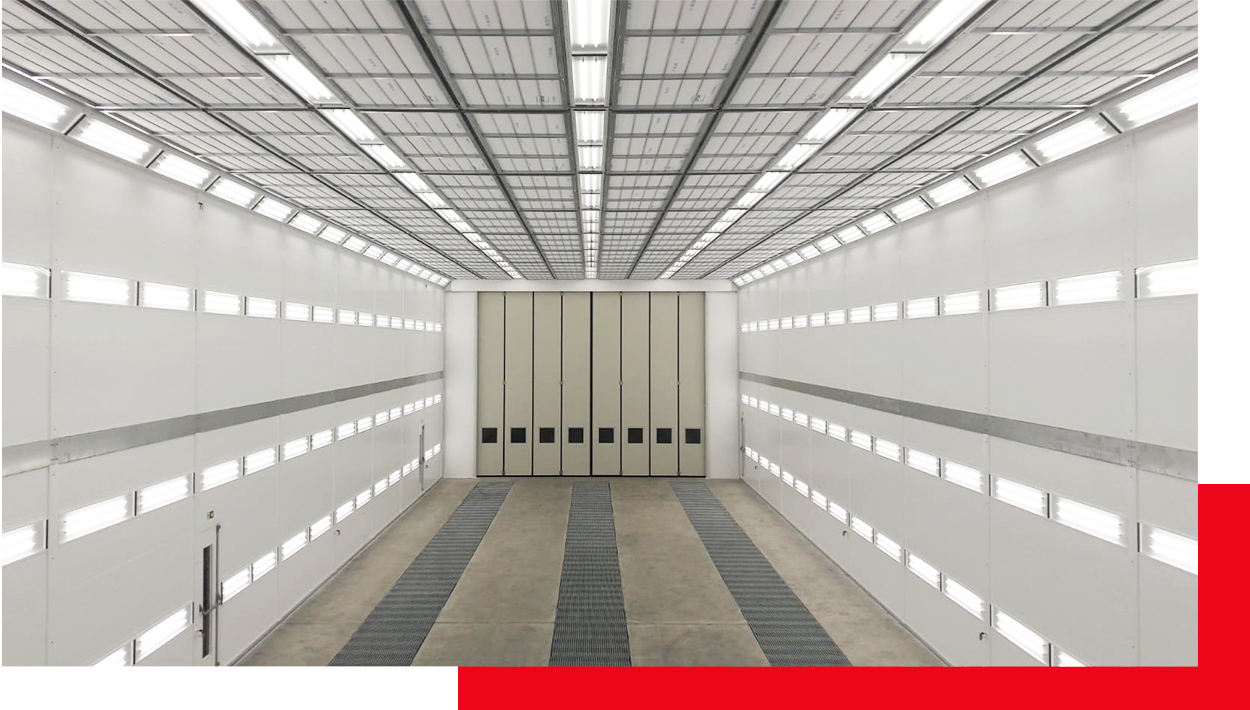 Step 2 of the Nautor’s Swan project was the industrial spray booth for boats. Already during the fair, we agreed on how to design it (dimensions, useful clearances, lights, door motorization, etc), how to position the AMUs, how to build the mezzanine, the relative humidity to be obtained in the booth in the different phases, the temperature differences to be achieved and the automated opening of the doors.

1 Cargo 40x12x08 with 8 special super-powered ventilation units lying on the floor slab and equipped with HRS and humidifiers, opening with motorized doors. 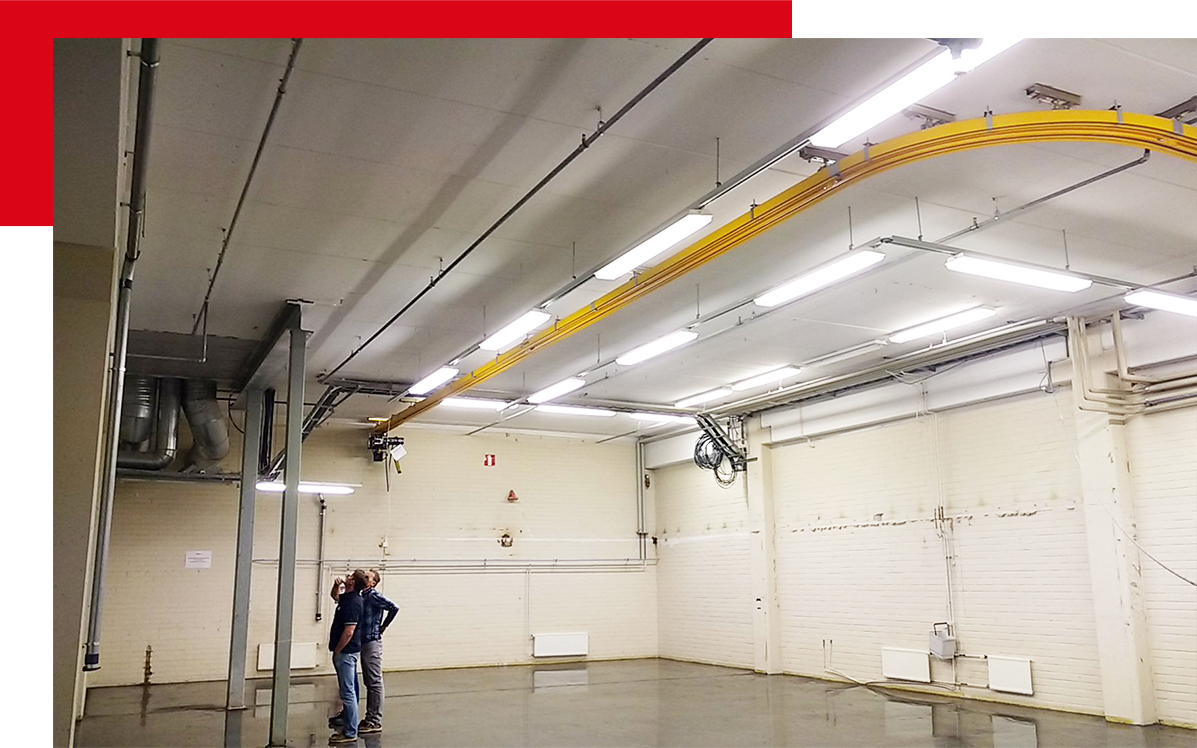 The visit to Finland

Once the proposal was finalized, we flew to Finland to provide consultancy services for our importer. After taking all the measurements, we had everything ready: the required height of the airflow based on the items they had to process, and the height of the ducts to achieve excellent abatement. 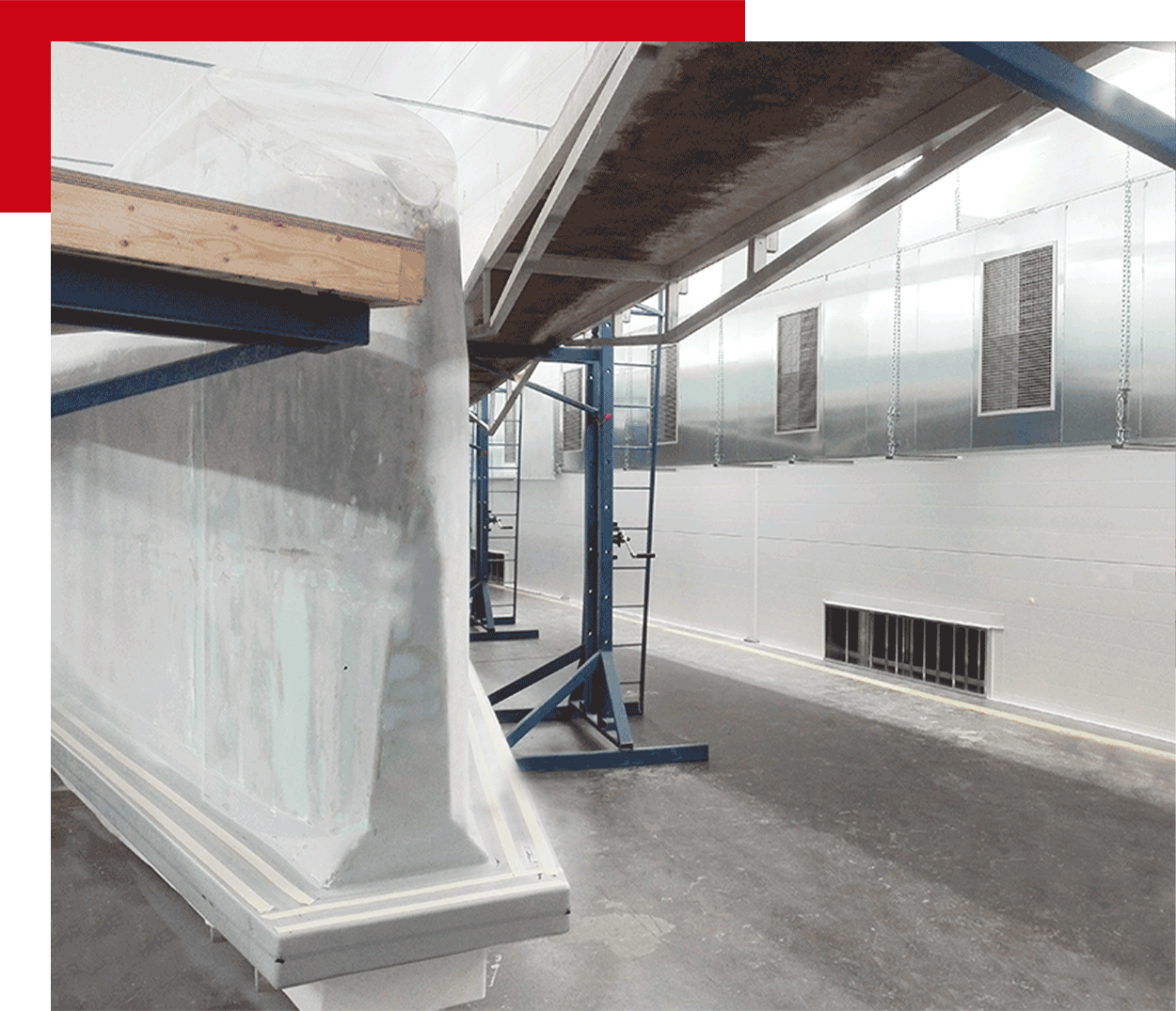 The request for a temporary oven for lamination

When we finally came to talk about the spray booth, a new problem arose: in the meantime, Nautor’s Swan had secured a contract to build a 37-meter yacht for which they needed to laminate the hull. They required a temporary laminating oven, which would later be dismantled and reused at the final production site, installed next to the spray booth.

Not only was the oven needed immediately, with a very tight schedule, but the temperature had to rise slowly and in a controlled manner so that the outer temperature of the hull would equal the inner temperature, despite the hull’s considerable thickness and length.

Therefore, we designed a system to heat the hull uniformly without resorting to third parties but using the system management software developed by USI Italia’s IT department, which also took care of the modulation and customization of the operating algorithms. 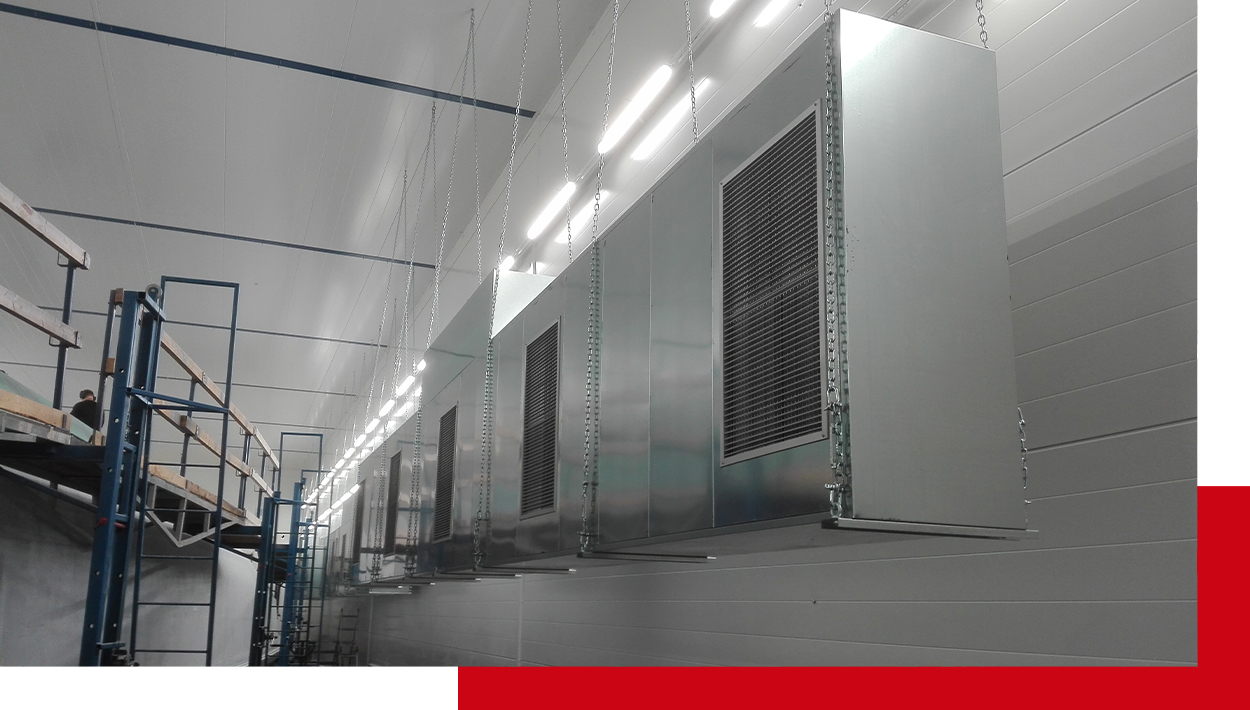 In order to speed up the completion, Nautor’s Swan offered to use local suppliers to erect the walls. However, those same panels would have to be reused for the next project, so we told them how and where to drill holes in the panels that would surround the hull.

But the challenges were not over, because the construction time for the temporary oven was shortened even further to 5 weeks. After a brief period of reflection, the USI Italia designers came up with a solution. 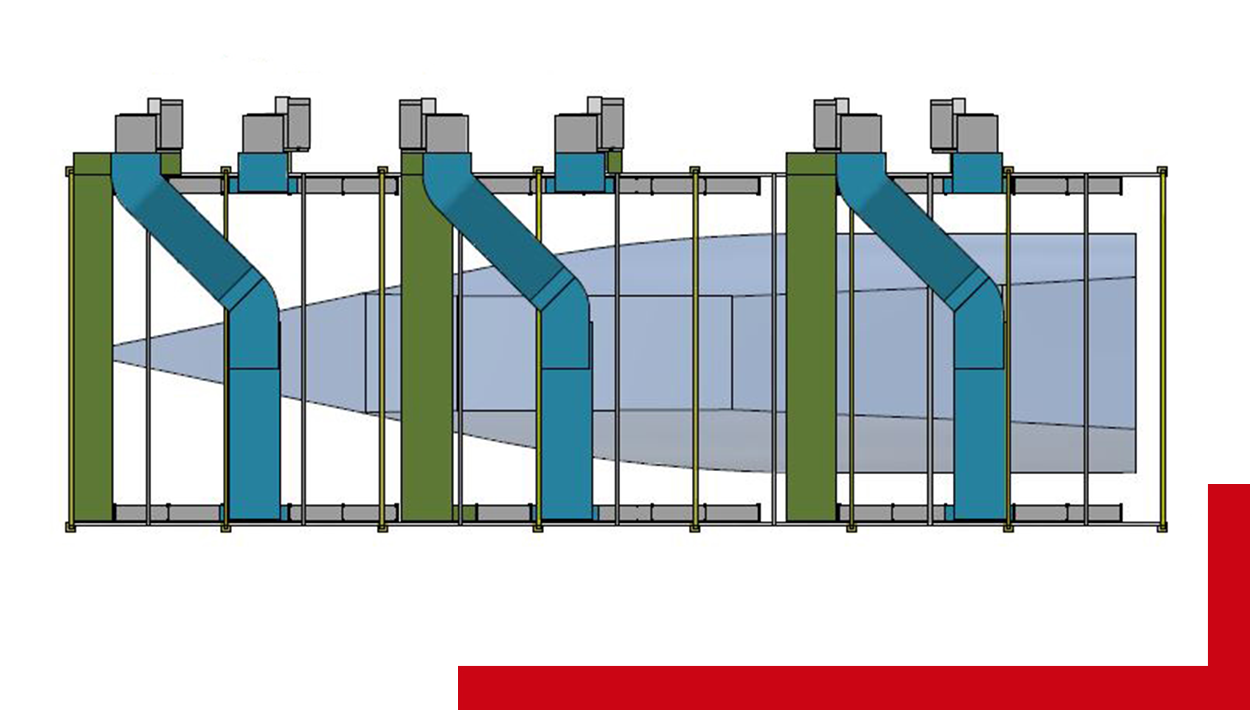 The only way to meet the customer’s time and technical requirements was to choose a solution that we had already implemented and adapt it to Nautor’s Swan’s needs. We then adjusted the standard AMUs so that the air vents would throw the air at the right height for their hull (with re-entry vents and ducts) in order to replicate and produce it on a tight schedule. The customer would only have to cut the panels to match the openings in our thermo-ventilation units.

Having developed a project in a very short time, we delivered the material in less than 4 weeks, a record lead time for an industrial plant. In the meantime, our IT department was working on creating algorithms to set the thermal gradient and temperature jumps, which were then fixed by our software manager on-site during installation. 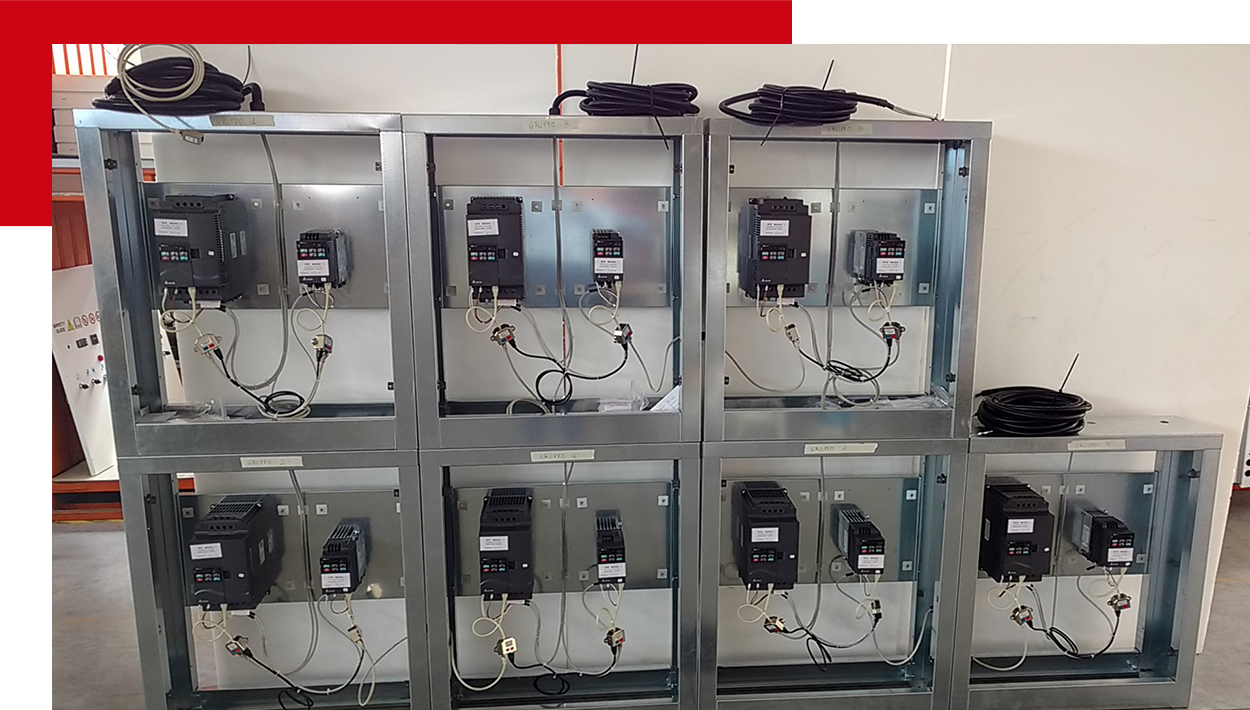 The customization of the project also involved the use of our DGTouch software as an control panel with visual dashboards, specially modified to manage the temperature control probes.

6 AMUs for oven use, on special insulated basement, direct flame heating with LPG

Ducts anchored to the ceiling and descending laterally into the cabin 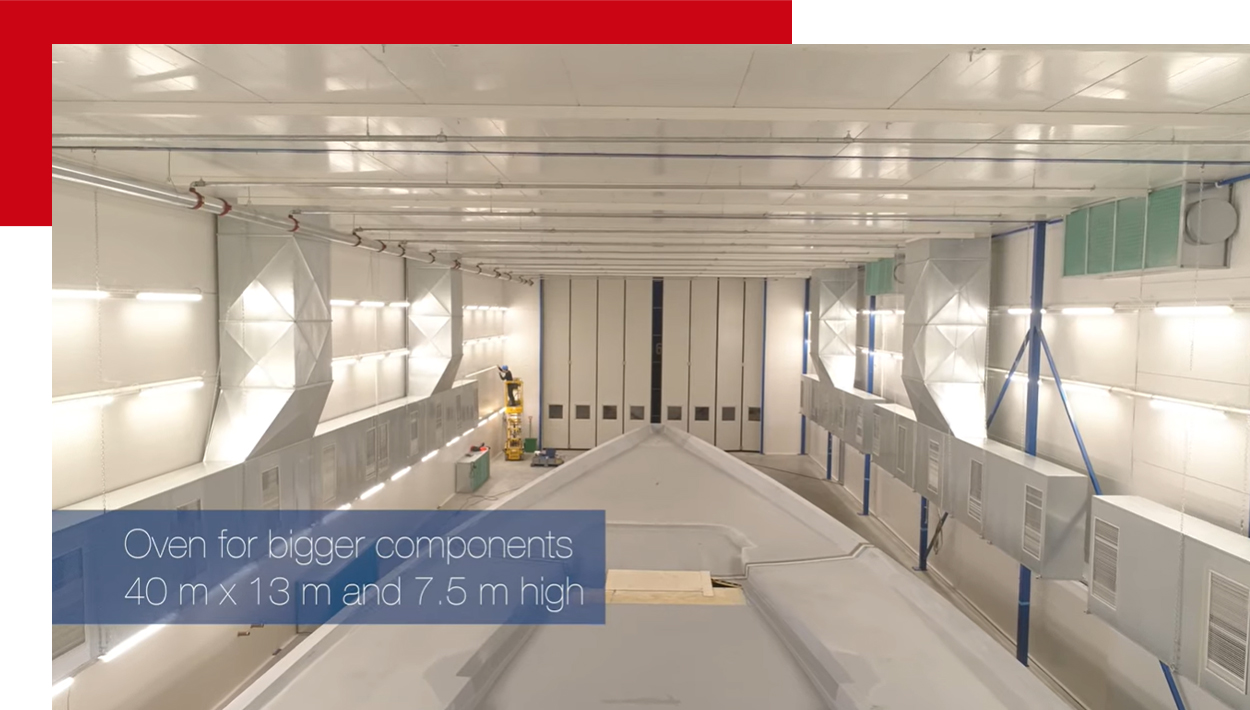 The final execution of the Nautor’s Swan project

Once the lamination and drying of the 37-meter yacht were finished, we completely recovered the material supplied for the temporary oven and shipped 6 HRS, which were integrated into the AMUs, and one motorized door identical to the one installed in the spray booth, for the final implementation of the Nautor’s Swan project.

IT MIGHT INTEREST YOU
A wide range of complementary products that can be used in bodyshops and industry. High-performance, Made in Italy solutions, designed to be integrated perfectly into our systems. All in pure USI Italy style. 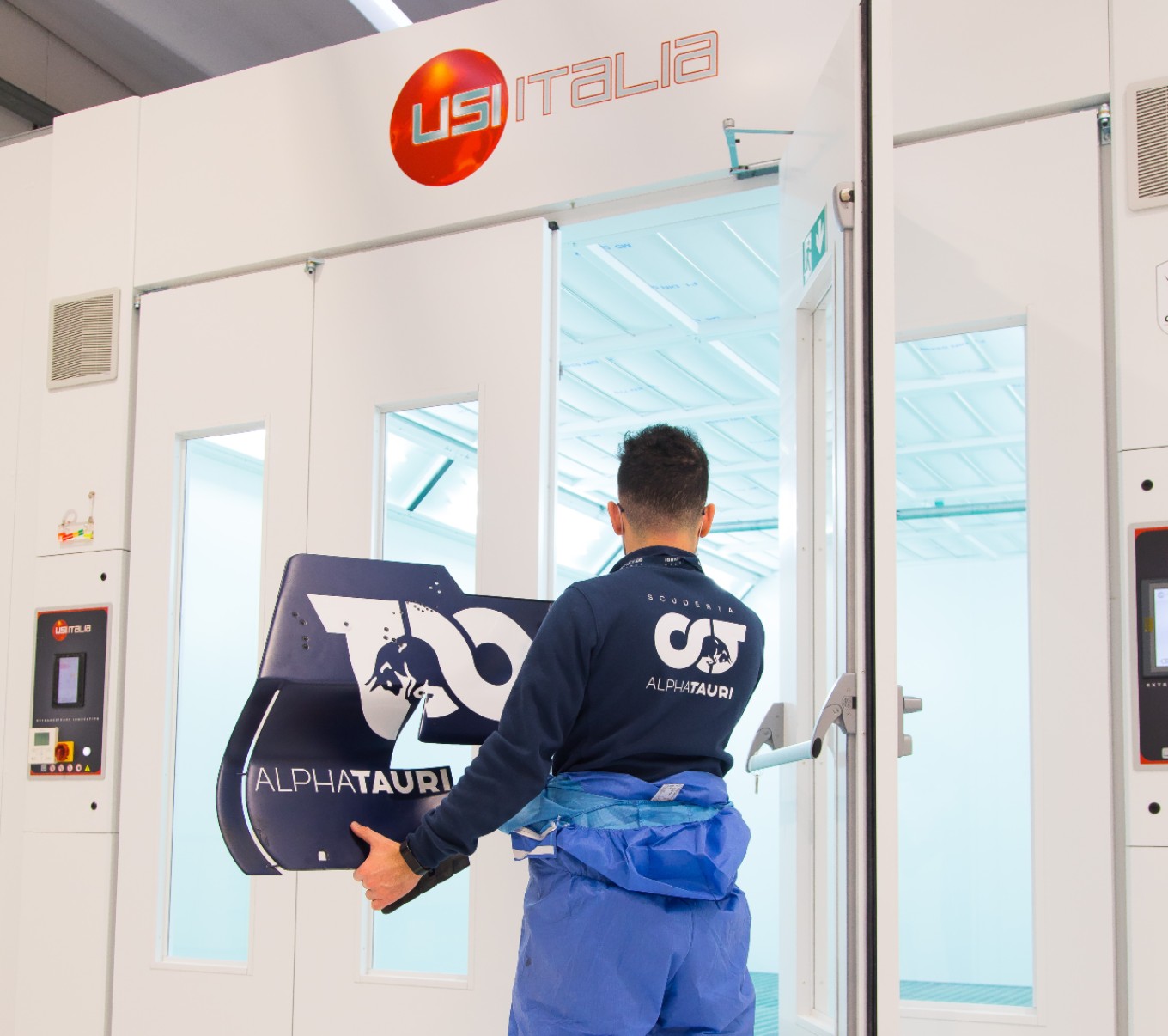 USI Italia is pleased to renew its partnership with one of the most successful Formula 1 racing teams. A collaboration that has allowed us to bring our experience in the paint sector to the highest levels of performance.